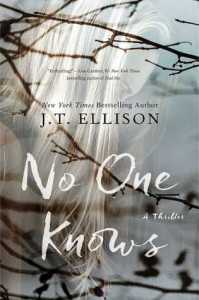 In an obsessive mystery as thrilling as The Girl on the Train and The Husband’s Secret, New York Times bestselling author J.T. Ellison will make you question every twist in her page-turning novel—and wonder which of her vividly drawn characters you should trust.

The day Aubrey Hamilton’s husband is declared dead by the state of Tennessee should bring closure so she can move on with her life. But Aubrey doesn’t want to move on; she wants Josh back. It’s been five years since he disappeared, since their blissfully happy marriage—they were happy, weren’t they?—screeched to a halt and Aubrey became the prime suspect in his disappearance. Five years of emptiness, solitude, loneliness, questions. Why didn’t Josh show up at his friend’s bachelor party? Was he murdered? Did he run away? And now, all this time later, who is the mysterious yet strangely familiar figure suddenly haunting her new life?

In No One Knows, the New York Times bestselling coauthor of the Nicholas Drummond series expertly peels back the layers of a complex woman who is hiding dark secrets beneath her unassuming exterior. This masterful thriller for fans of Gillian Flynn, Liane Moriarty, and Paula Hawkins will pull readers into a you’ll-never-guess merry-go-round of danger and deception. Round and round and round it goes, where it stops…no one knows

Married couple Aubrey and Josh arrive together at a hotel to each join their friend’s separate batchelorette and batchelor parties, but Josh never makes it to his and is never seen again.

I was immediately drawn in to this tale of a husband who goes missing without trace in mysterious circumstances. It was impossible not to be hooked and want to know exactly what happened. Did he leave willingly, was he kidnapped, had he been murdered. The fact that Aubrey was initially charged with his murder suggests the police thought he was dead, but you never really know.

In the present day it is five years since Josh went missing and he has just been officially declared dead by the State of Tennessee. This declaration has been sought by Aubrey’s Mother in Law from hell, Daisy who is intent on claiming the large insurance that Josh took out just before he disappeared.

Aubrey is the main narrator in the book and she divides her life into the periods, Before, During and After Josh. They have know each other since childhood so Josh has always been a big part in her life and coming to terms with his disappearance hasn’t been easy. As well as Aubrey we hear from Daisy and also Josh as the time frame jumps backwards and forwards over time to fill in the gaps and tell us little bits about their own history and circumstances. As ever depending on who is telling the story there is always the question about how much of it is actually true.

The story that we think we know starts to take a different twist firstly when Aubrey meets Chase who has more than a hint of Josh about him which leads you to question who he is; and secondly when her foster brother, fresh out of prison, reveals something he learned inside. From this point the story becomes less of a mystery and more of a search for the truth. There are shock revelations and twists that make you question what you thought you knew and an ending that wasn’t what I expected.

For the most part I did enjoy this and I wanted to know exactly what happened. It was in the second half of the book that I began to lose some of that initial interest. Without giving away any spoilers there were several things that spoiled some of the twists and overall credibility of the plot for me. First was a revelation made by Daisy that spoiled what perhaps should have been a bigger twist than it actually was as I’d already guessed it. Secondly and more importantly when the truth was revealed about Josh, it was hard not to think that this was something that should have come to light when the police were investigating his disappearance. I’m also not sure I was comfortable with the ending, which seemed to be a way of tidying ends rather than being a realistic outcome.

I did read in the blurb after I’d read it that this was ideal for fans of Gillian Flynn among others, as I was one of the few that disliked Gone Girl, it might just be that this genre is not for me and I’m being too critical rather than going with the flow.

I received a review copy via NetGalley in return for an honest review.