I had the pleasure of meeting  Jan at one of the regular author/blogger meet ups that I go to. Jan Edwards writes golden age mysteries and Winter Downs the first of her Bunch Courtney Investigations won the Arnold Bennett Book Prize. 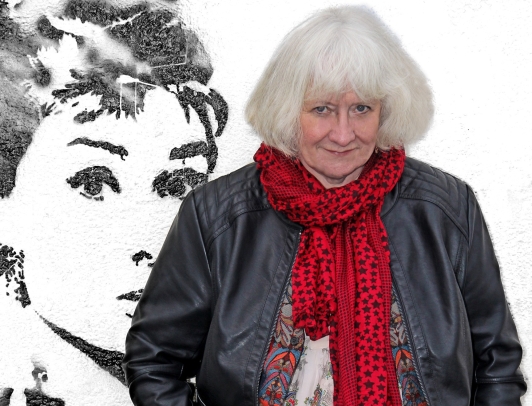 Her short fiction can be found in crime, horror and fantasy anthologies across the UK and USA (full details on her blog). She was a script writer for the Dr Who DVD and book  Daemons of Devil’s End. Jan is also an anthologist with the award winning Alchemy Press, co-owned with her husband Peter Coleborn. Their latest anthology is The Alchemy Press Book of Horror #1  (vol 2 will be out early next year).

So over to Jan

It was not until I reviewed my choices that I realised how they marked two distinct time periods; one between 1967 and 1970, and the other from 1996 to 1999. Looking back I can see that both were times of chaos and change, which, I suspect, have gone on to influence much of my fiction.

Nothing from very early or more recent years – there might have been but I was only allowed five! There are some upbeat songs in my wider playlist, honestly…

Legend of a Mind – Moody Blues (1968) I loved the Moodies, and, though they may seem very safe now, at the time they were generally viewed as a weird underground band by many of my classmates; most of whom were listening to pop and northern soul, with the occasional Stones track thrown in. I could as easily have chosen White Rabbit – Jefferson Airplane (1967) another truly sublime song!

Man of the World – Fleetwood Mac (1969) Possibly the saddest song ever written and one of the few that will make my scalp tingle every time I hear it. It was a close run thing between that one and Vincent Black Lightning 1952 – Richard Thompson (1991) or else Meet On The Ledge – Fairport Convention (1969).

Like a Hurricane – Neil Young (the 1993 unplugged version) Personal memories of 1996 when I first heard it. Another sad song in its feel but also one full of hope.

White Magic for Lovers – Drugstore (1997) for reasons too numerous, and some too odd, to go into. There is another Drugstore track I love but it contains a few rude words, and is somewhat macabre, and I thought I should keep it clean!

Unintended – Muse (1999) all about clearing the way for new beginnings. It was played at my second wedding.

Istanbul (Not Constantinople) – They Might Be Giants (1991) Every good album back in the day had a bonus track. So in addition to my ‘five’ songs (cough, cough) one additional track that reminds me of two people no longer in my life. More I cannot reveal. (I’m getting soft in my old age, so I’m letting this one slip through – a one time only concession!)

Highlight 5 things (apart from family and friends) you’d find it hard to live without.

Despite being something of a packrat (I hate throwing anything away) and an incurable bibliophile (Books dominate in this house!) I am not one for hankering after things that I no longer have. Nor do I crave many things in my life (if you exclude my amazon books/wish list)

Books – who can live without books?

Cats (or animals in general). Brought up on farm, my father was a shepherd, so animals are a part of my life.

Conversation – my father always claimed I was vaccinated with a gramophone needle. Stopping me from talking is the trick.

Solitude – despite being a chatterbox I do like my own company. I talk to myself constantly when I am writing fiction so better away from folks so they don’t think I am wholly mad.

Good food – I have umpteen cooks and chefs in the family so cooking is second nature. A life full of fast food and ready meals would be hell!

Be good to people.

Chase your dreams – you just may catch them.

Get of your bum and do it (whatever ‘it’ may be at the time).

You can never do favours – only pass them on.

Keep writing – and send it out to those markets (it does you no good sitting in a folder).

I may be possessed of a more matronly figure these days, but I used to be in the school gym team.

My Gr Grandfather – a Geordie Policeman – was murdered whilst on duty by a mad butcher.

I was (allegedly) the first qualified female locksmith in UK.

What are the first 5 things you’d have on your bucket list?

Well it’s like this… three different (and unconnected) psychics have told me that I’d live the second half of my life near the sea on the proceeds of my own work. (I’m still waiting, guys!  Hahahaha! )

Finally buying that house by the sea that I was promised.

Write a hit film (or crime series – I’m not greedy) to pay for that house by the sea.

Learn to play more than 3 chords on the guitar that has been gathering dust in various homes for the past 35 years.

Thanks for joining me today Jan, it was lovely discovering more about you. These questions reveal so more about a person than any chat could do. I’m hoping my leniency with the music question doesn’t come back to haunt me with other authors upping the ante! Maybe this time next year I’ll have all dropped all the other questions and have opted for Fifteen on Friday music choices. I heartily agree with your advice to your younger self – such a shame we have to grow up to be so wise. Some fascinating things people don’t know about you. I’m sure there won’t be many (if any) other female author’s who can claim to be a locksmith, let alone the first! Sincerely hope you get that house by the sea (can you sue psychics?) 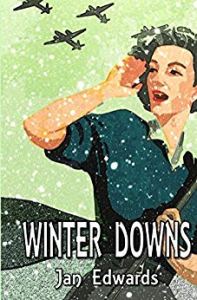 Bunch Courtney stumbles upon the body of Jonathan Frampton in a woodland clearing. Is this a case of suicide, or is it murder? Bunch is determined to discover the truth but can she persuade the dour Chief Inspector Wright to take her seriously?

In January of 1940 a small rural community on the Sussex Downs, already preparing for invasion from across the Channel, finds itself deep in the grip of a snowy landscape, with an ice-cold killer on the loose. 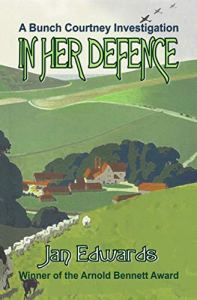 In Her Defence (Bunch Courtney 2)

Bunch Courtney’s hopes for a quiet market-day lunch with her sister are shattered when a Dutch refugee dies a horribly painful death before their eyes. A few days later Bunch receives a letter from her old friend Cecile saying that her father, Professor Benoir, has been murdered in an eerily similar fashion. Two deaths by poisoning in a single week. Co-incidence? Bunch does not believe that any more than Chief Inspector William Wright.

Set against a backdrop of escalating war and the massed internments of 1940, the pair are drawn together in a race to prevent the murderer from striking again. 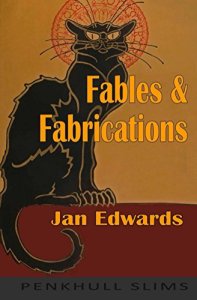 From the Arctic wastes of Norway to a fun-laden evening at the fair, Jan Edwards leads us through a world where nothing is as it seems. Shape changers and ancient spirits roam, and cats play their inscrutable parts in stories that unsettle and disturb the reader’s perceptions. Fourteen tales of mystery, mirth and the macabre. Chosen from her back catalogue of horror and dark fantasy these stories, leavened with a sprinkle of verse, have been collected for the first time in this volume.

Leinster Gardens and Other Subtleties

Includes the BFS award short-listed ‘Otterburn’, plus a previously unpublished tale. “All adeptly told, often with a sense of locale and time neatly placed within the narratives. Her family history informs and inspires some of her stories. Folklore figures as a focus in more than one story, whether urban myth or historical lore. But ghostly they are and deceptively disturbing.”